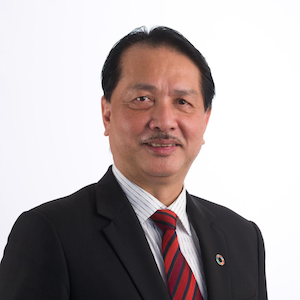 His area of expertise is in breast endocrine cancers, with numerous published papers and textbook chapters in endocrine surgery. He trained in breast and endocrine surgery under the Royal Australasian College of Surgeons Fellowship training programme and obtained his Master of Surgery and Medical Degrees from the National University of Malaysia.

He chairs multiple medical professional councils and national-level technical committees and is actively involved as a policymaker in global organisations such as the World Health Organization (WHO) and the Drugs for Neglected Diseases initiative (DNDi). He is also a Councillor-at-Large (2017-2021) in the Executive Board of the International Society of Surgery (ISS) and chairs the Global Surgery Committee of ISS. In March 2020, he was elected as the Chairman of the Asian Association of Endocrine Surgeons.

Dr Noor Hisham has been conferred numerous local and international awards including the prestigious Fellowship Ad Hominem of the Royal College of Surgeons of Edinburgh in 2018 for his contributions toward healthcare. In 2019, he was given the honour to deliver the distinguished Martin Allgöwer Lecture at the 48th World Congress of Surgery in Krakow, Poland.

His special interest lies in enhancing universal healthcare coverage to marginalised communities and bringing personalised healthcare back to the community and home through digital technology and creative innovation.